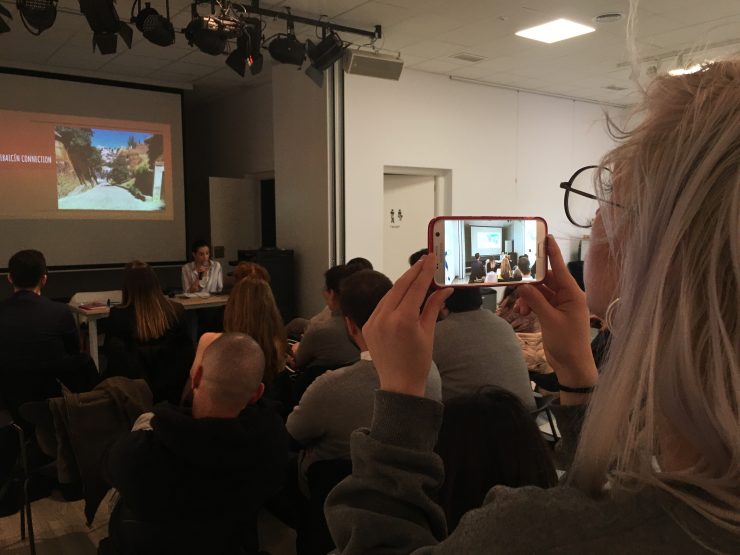 Our first session was so gratifying we decided have an early start on our second day to hear the presentations of more Young Ambassadors. We moved from Dalt Vila to a youth centre located in Ibiza town for the remaining of our second day.

There, we heard the presentation by Edna, a Law student from Cape Verde who presented a portrait of different touristic aspects of her hometown, Cidade Velha. With a lively music accompanying her presentation she took us on a trip to this World Heritage Site and shared the good practices undertaken in the city as well as some of the actions developed there so far.

After her it was Esperanza Barrales’ turn. Esperanza is a Tourism student from Granada. Her presentation aimed to involve young people in Heritage Preservation. And her goal is to do so through the promotion of sustainable and respectful attitudes around a heritage environment. She presented different walking routes around Granada’s Albaicín neighbourhood from different sensory perspectives.

Rita Pereira, from Guimarães, was the next presenter. She delivered a passionate speech on what it means to be a proud citizen of this Portuguese World Heritage City. She also shared with us a video she filmed herself of her daily routes around her World Heritage hometown. It is important to remember that Guimarães was Europe’s Capital of Culture in 2012 and is an example of good practices in terms of tourism and heritage.

After a short break, presentations continued with Segovia. Ana Martin, who’s been promoting her hometown in Denmark, spoke about Segovia’s historic, cultural, gastronomic and natural heritage. Her experience as a Young Ambassador abroad strengthened her link to her hometown but also created a bond with Denmark that she intends to keep alive forever.

The final presentation was by Vienna’s Young Ambassador, Alexandra Parger. Her hometown was also present in Aranjuez’s First Meeting of Young Ambassadors of World Heritage, back in 2017. It is not her first time representing her city either, as she also took part in the Young Professionals Forum in South Korea.

Alexandra shared her vision of a city filled with life that is ready to be shared with the world, no matter where they come from. Although the world may see Vienna as the capital of Schnitzel and classical music she showed us there is so much more beyond that.

Gaining popularity amongst visitors in the last few years, Alexandra claimed: “Vienna is a way of life!” where locals mix with tourists and people who live in Vienna although they weren’t born there. She finished her presentation saying “Vienna has never been more alive than it is today!”.