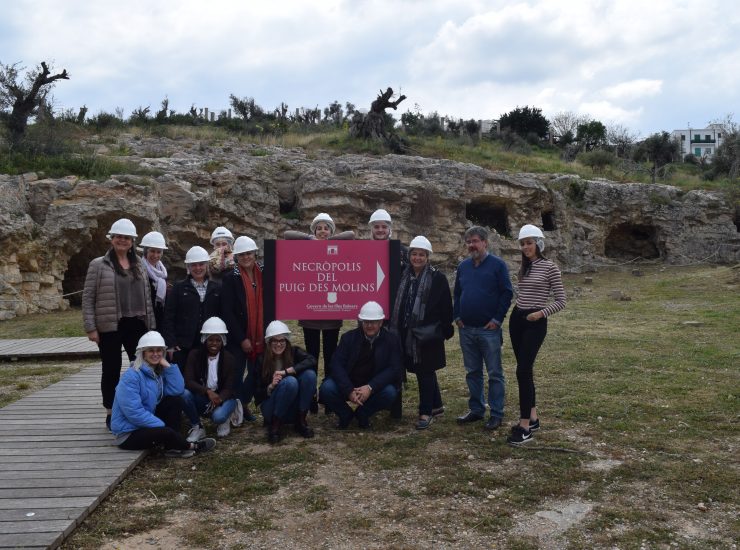 After a tireless and enriching morning working on the writing of the Decalogue of Good Practices, ahead of the upcoming World Congress of Heritage Cities that will be held in Krakow in June, organisers had another surprise in stores just before the departure of the whole group back home.

That’s why, after leaving the centre where they worked these days, the group took off to visit Ibiza’s Necropolis and Monographic Museum of Puig des Molins. The visit started in the outer part of the museum, after all members of the group put on their helmets for safety before visiting the underground tombs.

Once underground they could understand the dimensions of this ancient cemetery that was first used by Phoenicians, then Punics and, finally, Romans. Currently, Puig des Molins is not only the most important ancient necropolis of the island. It is also the place that has provided the most numerous and varied series of materials, making it the largest archaeological site of the Pitiüses Islands and a fundamental milestone for research and reconstruction of the history of the city and the island in Ancient times. Its adjacent museum is open daily, except Mondays and bank holidays.

Besides, its 5 hectares of preserved original surfaces, make it the main Punic necropolis in the Mediterranean. That is why it was included in UNESCO’s World Heritage List, in 1999. The group was fascinated by the discovery of this fascinating museum, which is literally minutes away walking from Ibiza’s town centre and very close to its impressive walled city, Dalt Vila. It was the perfect way to end this meeting!